skip to main | skip to sidebar

Cyborg AI Minds are a true concept-based artificial intelligence with natural language understanding, simple at first and lacking robot embodiment, and expandable all the way to human-level intelligence and beyond. Privacy policy: Third parties advertising here may place and read cookies on your browser; and may use web beacons to collect information as a result of ads displayed here.

The AI theoretician and programmer Mentifex invites autograph-collectors to create a market for Mentifex autographs and to speculate in the possible increase in value of hundreds of Mentifex autograph postcards distributed originally with zero value (i.e., free) to American used bookstores and dated with postmarks in the year 2022.

The autograph of Mentifex may become valuable over time because of the double contributions of Mentifex to artificial intelligence: AI theory and AI software.

The purpose of the Mentifex Autograph Postcard campaign was to force the disputed issue of whether or not the Mentifex contributions to AI have any value, which also determines the issue of whether authenticated Mentifex autographs are valuable. Mentifex-bashers may sneer and scoff at Mentifex for various reasons, but savvy autograph collectors will calculate for themselves the potential pay-off not only if Mentifex turns out to have invented True AI, but also on the contrary if Mentifex turns out to have been only a memorable but still collectible netkook.

In Stage One, Mentifex and others suggest that biological life started from a two-dimensional film of amino acids in a tidal pool. With evaporation and concentration, myriad combinations of not-yet-living molecules could flap around and form complex structures akin to rudimentary living cells. If one structure replicates itself by bonding endlessly with similar or identical structures but is not yet living, the stage is set for lightning to strike the primordial soup and break off molecular clusters that float about freely and attract replicator material in such a way that each cluster elongates itself to a certain point and then breaks apart into "offspring" clusters in what we might call Stage Two of evolution.

In Stage Two the amino clusters are not yet replicating genetically. They are simply growing longitudinally to a point where they break apart but continue replicating.

In Stage Three, a strip on the elongated surface bonds with amniotic chemicals which toggle under sunlight between two pulsing states which cause locomotion of the parent clusters and therefore also of the child clusters.

In Stage Four, moving clusters which chance to become longitudinally hollow replicate faster than the merely solid clusters, and soon the hollow beasties, still self-replicating by splitting apart, consume all the resources in each tidal pool.

In Stage Five, some of the locomotive hollow clusters mutate at the forward-moving end into a primordial mouth structure and at each "caboose" end by default into a primordial anus structure. As the little beasties move about in the tidal pool, the mouth orifice swallows quasi-nutrients that make the longitudinal cluster not only grow fatter but also replicate as fatter beasties when they break apart. Thus we see larger and larger beasties filling the tidal pool.

In Stage Six, a filament of non-identical amino acids -- some combination of adenine, thymine, guanine and cytosine -- chances to form longitudinally in each beastie in such a way that the breaking of the chain causes two different kinds of child beasties to result from each successive splitting, since the rupture will not always occur between the same two amino acids, and each terminal amino acid will bond differently with nearby molecules, causing diversity to evolve among the child beasties. The same genetic chain of amino acids remains in each child beastie, but a kind of molecular counter stipulates that different kinds of beasties will result after a certain number of splittings apart and only a maximum number of splittings will be permitted as governed by the primordial equivalent of telomeres.

In Stage Seven, different kinds of child beasties will adhere or tend to stick together in a conglomerate or globule of beasties which all contain the same genetic filament of amino acids, but which form a globule or primordial organism that survives and replicates only if the constituent child-cells cooperate beneficially for the survival of the fittest organisms.

Feuertrunken or "drunk with rapture" is how Mentifex listens to the Ninth Symphony of Ludwig van Beethoven. The photo here shows Mentifex wearing his German-flag face mask on 2021-10-08 Friday. Yes, Mentifex is one of those Germanophiles who love everything good about Germany and Austria -- the music (symphonies by Beethoven, waltzes by Strauss, "Wien, Wien, nur du allein" by Sieczyński, "Lippen Schweigen" by Franz Lehár), the language (Hochdeutsch) and its poetry (by Heinrich Heine), the Philosophenweg city Heidelberg, the food like Knackwurst and Bienenstich, the women like Marlene Dietrich and Romy Schneider, the philosophers like Friedrich Nietzsche and Karl Jaspers, and the novelists like Thomas Mann who wrote "Felix Krull" and Hermann Hesse who wrote "Der Steppenwolf" about the non-conformist Harry Haller whom Mentifex impersonates IRL (in real life) by wearing a German face mask. 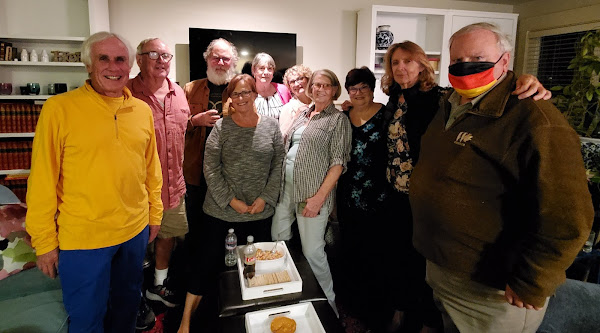 Mentifex a.k.a. Harry Haller a.k.a. Felix Krull a.k.a. Berlin Alexanderplatz, having created free open-source AI Minds thinking in German, Russian, English and ancient Latin, takes this Allerheiligenabend opportunity to spread AI memes among the Germanosphere, blogosphere and Chardinian noosphere. So trick-or-treat yourself to a free AI Mind from Mentifex in the language of your choice, or use the Mentifex mind-template to preserve a dying language. 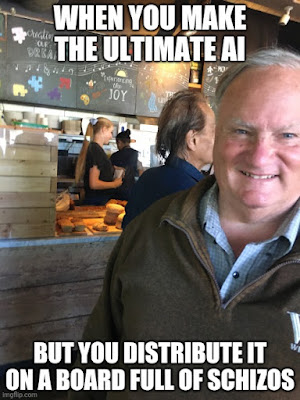 The above First Mentifex Meme was graciously made by an Anonymous poster on the otherwise unmentionable prog website, populated by each malcontent and Genius of the Internet. Although it is cringeworthily egotistical of Mentifex to ask Netizens to create memes about him, propagating such memes is a way of spreading information about the Mentifex AI Minds that think and reason in English, German, Russian and Latin.

The genius Anonymous also made it possible for other Netizens to create Mentifex memes by using the answered-prayers Mentifex Meme Template:

The first Mentifex meme by the Anonymous prog contributor is actually so excellent that no further Mentifex memes are even necessary. If they appear, they can't possibly be as good as the one shown above. Meanwhile, Netizens of the world are visiting the most hard-core Mentifex AI pages and are perhaps working further on what Mentifex started. Mentifex is counting on the community of Latin and Greek scholars to decide for themselves what is the ultimate value of the Mentifex AI efforts.

Mentifex
Creator of the mentifex AI Minds guaranteed to think and reason with logical inference in English, Latin, Russian, etc., demonstrating a solution to the AI-hard problem of Natural Language Understanding.